(aka Part 2 of my Barking Mad Harry Potter Weekend)

In the week leading up to the “Deathly Hallows” premiere,the subject of  Butterbeer Cupcakes arose on Twitter.  This sounded like a recipe that I really needed to try.  Obviously premiere weekend was the perfect time to give it a go.  Friday afternoon I made sure that I had all of the needed ingredients.  Saturday after the movie I pulled up the recipe on my notebook computer, tied on my apron, and got to work!  Ginny started out helping me but somehow ended up drifting out of the kitchen.

I used this recipe, which looked easy enough but did prove to be a bit of a challenge for someone who has never filled cupcakes before.  Everything went smoothly (and, being a batter-eater, I must note that the batter is SO GOOD!)  until it was time to fill the cupcakes with the Butterbeer Ganache.  The recipe suggested doing this using a squeeze bottle.  I’ve seen empty squeeze bottles for sale, but when it came time to purchase one, I went to three different stores and couldn’t find one!  I decided that I would just use my  Tupperware Pastry Bag decorating kit –  which I had never used before (Danger, Will Rogers, Danger!!)

Unfortunately, I assumed that I was supposed to insert the pastry tip into the bag, then fill the bag with the ganache.  Actually, you are supposed to screw the tip onto the outside of the bag.  So, when I poured the ganache into the bag, it immediately started running out of the tip AND out from around the sides of the tip.  What. A. Mess.  I managed to insert the tip into the cupcakes but the whole process was really messy, drippy and sticky.  Maybe I should have waited until the ganache had cooled some?  I had expected it to make a little “filling” in the center of the cupcakes but it pretty much just got absorbed into the cupcakes, I’m not sure that it was even worth all the trouble.  Never having made ganache before or filled cupcakes before, I don’t have anything to go on.  If I made the cupcakes again I’d be tempted to skip this step, though I now have a squeeze bottle and would like to try again, using the squeeze bottle and a cooler ganache.

After the ganache fiasco, I frosted the cupcakes and then drizzled more ganache over the tops of the cupcakes.  I did not think this procedure through beforehand and as I prepared to drizzle I realized that the cupcakes were on my cooling rack, meaning that any ganache that dripped off would be dripping right onto my counter (which already had enough ganache on it from the “filling”).  I’m not a good “clean as you go” cook/baker so I did not have much counter space available and decided to just leave them on the rack.  I put paper towels underneath to try to catch/absorb the drips. 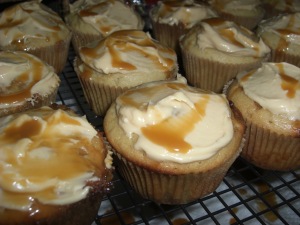 (Notice the ganache-drizzled paper towel underneath?  Ha ha.). Not works of art, but still visually appealing (in my opinion, anyway!).   Tastewise, they were quite delicious and everyone in the family loved them.  I’ll definitely make them again.  Also, there was almost  a cup of ganache left over and it tasted great warmed and drizzled over vanilla ice cream!!
PS – In case you’re interested, here’s my post about making Butterbeer:  https://realmugglemom.wordpress.com/2010/08/29/how-i-celebrated-harry-potters-birthday/

Inspired by this post from Carrot’s ‘N’ Cake’s helpful “Grocery 101” series, one of my goals is to get back into meal planning (more on why I stopped another time).  I want to focus more on using items that I already have on hand, rather than choosing recipes for which I have to purchase all-new ingredients (my usual modus operandi).  As I recently posted on Tumblr,  I started by going through my pantry and making a list of on hand items that might be used for recipes.  The items were:

This afternoon I purchased some boneless, skinless chicken breasts.  I was planning to bake them but wasn’t sure exactly how.  I think in the back of my mind I was thinking of using the artichoke hearts in a recipe that calls for baking chicken breasts & artichoke hearts in balsamic vinaigrette dressing.  However, I didn’t have, nor did I purchase, the dressing (go figure?!).

I visited my favorite online recipe source, FoodNetwork.com.  The site has a feature where you can type in (an) ingredient(s) and it will suggest recipes.  I wasn’t sure how many ingredients you could put in, so I figured I’d start with several and shorten if necessary.  First I typed: “chicken pesto sundried tomato artichoke” and it took me to a recipe for crab cakes (?).  Next I tried “chicken pesto sundried tomato” and it gave me the previous recipe plus two more, neither of which contained chicken.  “Chicken pesto” provided a better list of results (so, I’ll be sure to just input one or two ingredients in the future).

One recipe that caught my eye was “Gordon and Gary’s Pesto Chicken Quesadillas.”  I remembered that I had a pack of whole-wheat tortillas in the fridge, and I also had finely shredded parmesan cheese.  Since it was getting late and it was eleventy-billion degrees outside, I didn’t want us to have to grill the chicken.  BUT, I had some leftover chicken that was already cooked, seasoned, and cut into bite-sized pieces.

I thought the quesadillas turned out really nicely.  The pesto, chicken and cheese tasted good together and the quesadilla added some textural interest.  The children didn’t seem to care for the quesadillas/pesto but they ate the chicken.  Muggle Man LOVED them and even Tweeted “Awesome dinner tonight” to me.  WIN!

Swirling in the Pensieve